Beyond Vision’s HEIFU® drone comes enclosed in a custom-made special casing, assembled to ensure the best protection of the device before it reaches you. If you receive the drone with any part missing or broken, please contact Beyond Vision immediately.

Inside the case you should find the following components:

The HEIFU® drone is part of an ecosystem that includes the beXStream® platform, local and remote communication networks and accurate positioning systems. The macro block diagram of the HEIFU® can be seen in the following figure:

Physically, the HEIFU® drone looks like the figure below:

It is mainly composed by: * The body structure: where all the electronics are located; * Six folding arms: to hold the rotors; * Landing gear: used when the drone is not flying; * The battery compartment: to shelter the battery and a rail to hold the payload (gimbals, cameras, other…).

On the back side of the drone, one has access to the on/off button, some status indicators and the interface connectors, according to the picture below:

Two manual flight controller can be included with the HEIFU® drone.

The Herelink controller allows the operator to control and monitor all aspects of the drone and its operation. This includes piloting the drone, interacting with the attached camera and its gimbal, and building and tracking missions, all while providing the necessary information to ensure a safe and controlled flight, such as drone telemetry, the camera’s video feed, environmental information, and more. This can be done with a local drone within the control’s radio link range, or with a drone anywhere in the world, as long as both the drone and the controller have access to the internet. The pictures below show the front and back view of the Control, which is comprised of a touch screen, two joysticks for piloting the drone, a wheel, and 5 buttons.

The physical buttons have the following capabilities:

Charging of the controller is done through the micro-USB port.

When you open the app, you should see the following menu : 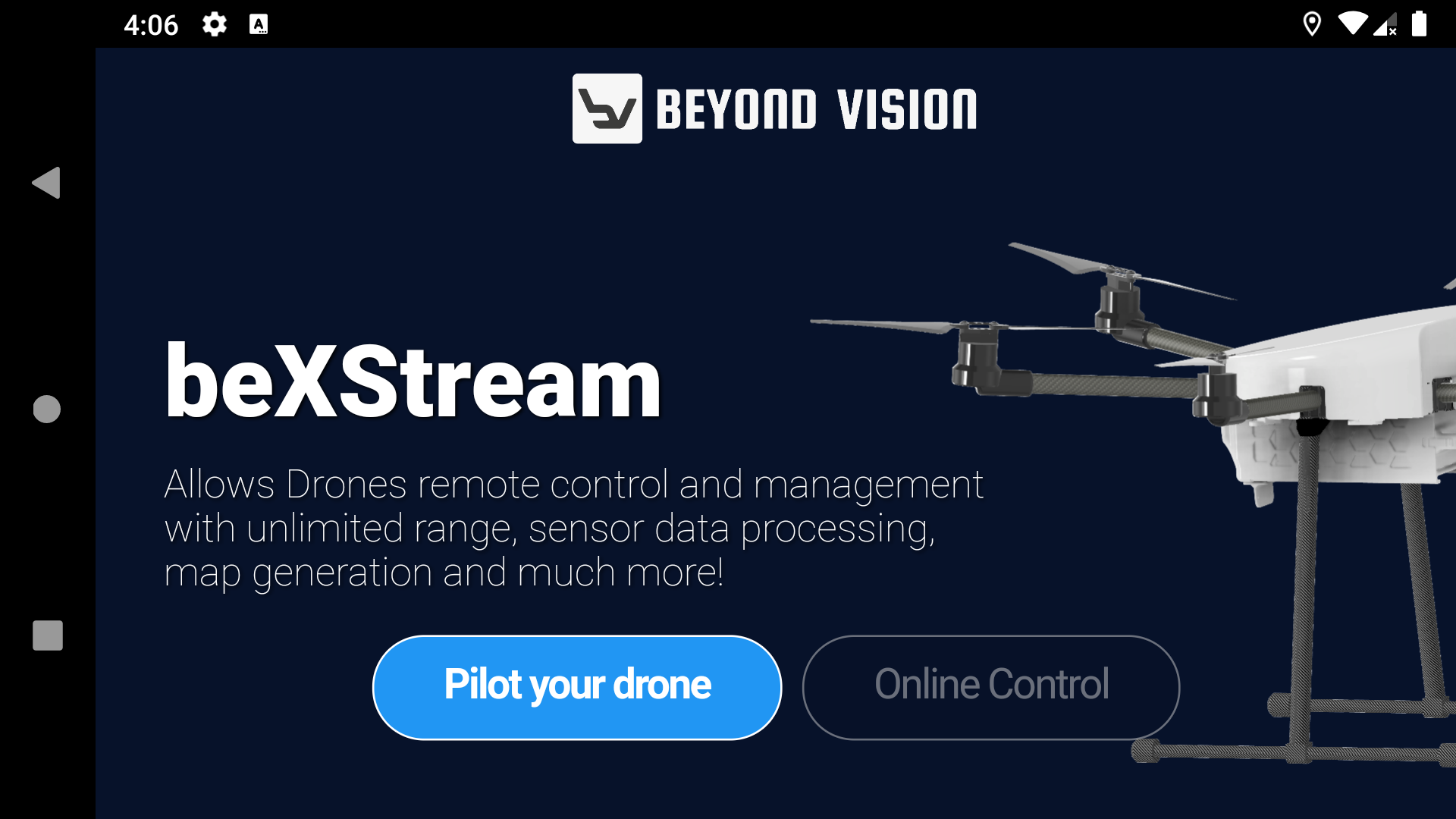 The first option « Pilot your drone » is intended for local scenarios where you are communicating through radio with a drone close to the controller. The second option is reserved for drones that are connected to the internet.

When you select the « pilot your drone » option, the following screen should appear : 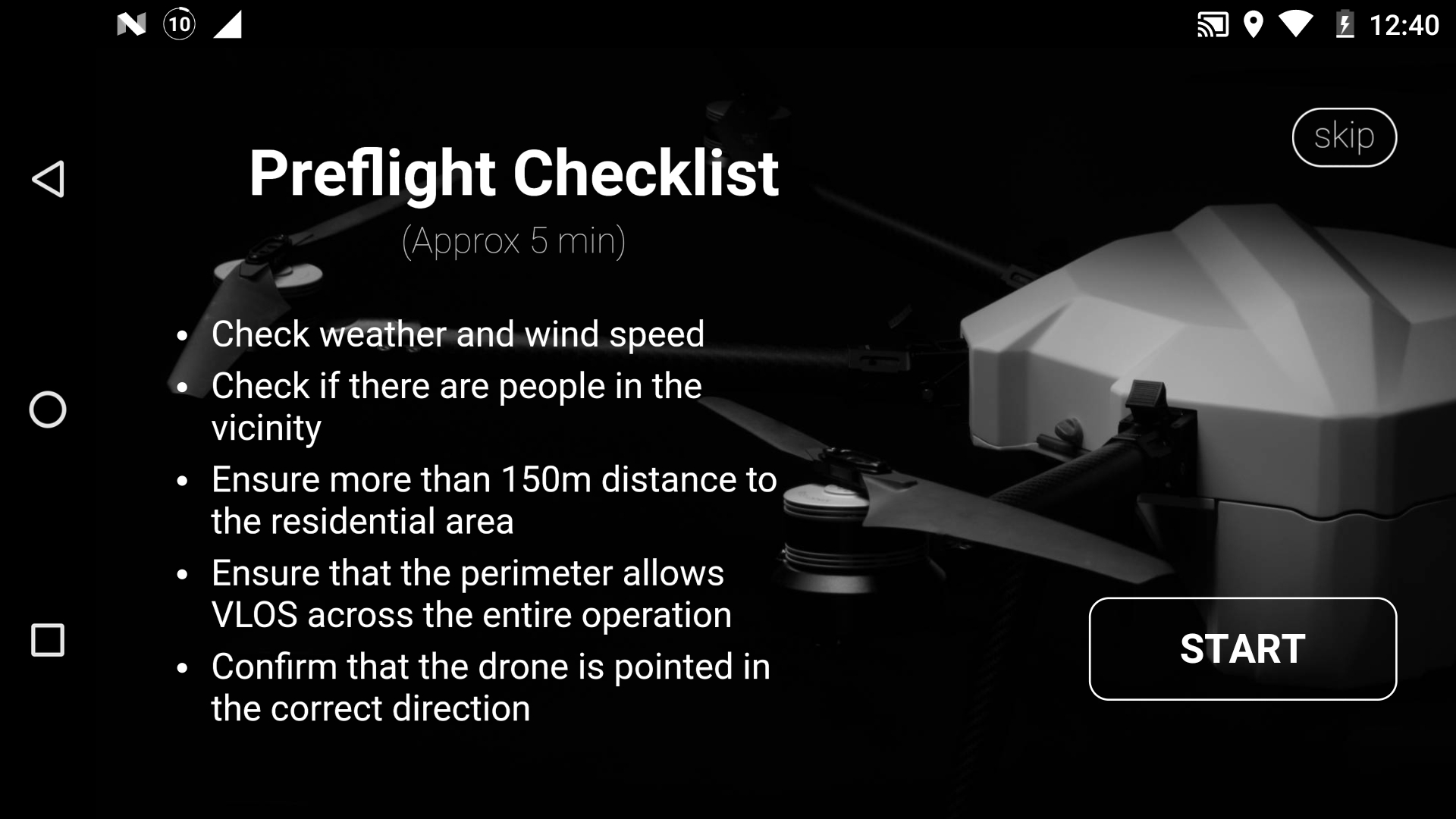 By following these steps, you can ensure the drone is correctly setup to fly.

After following or skipping the preflight procedure, you will enter the monitor screen where the action starts. 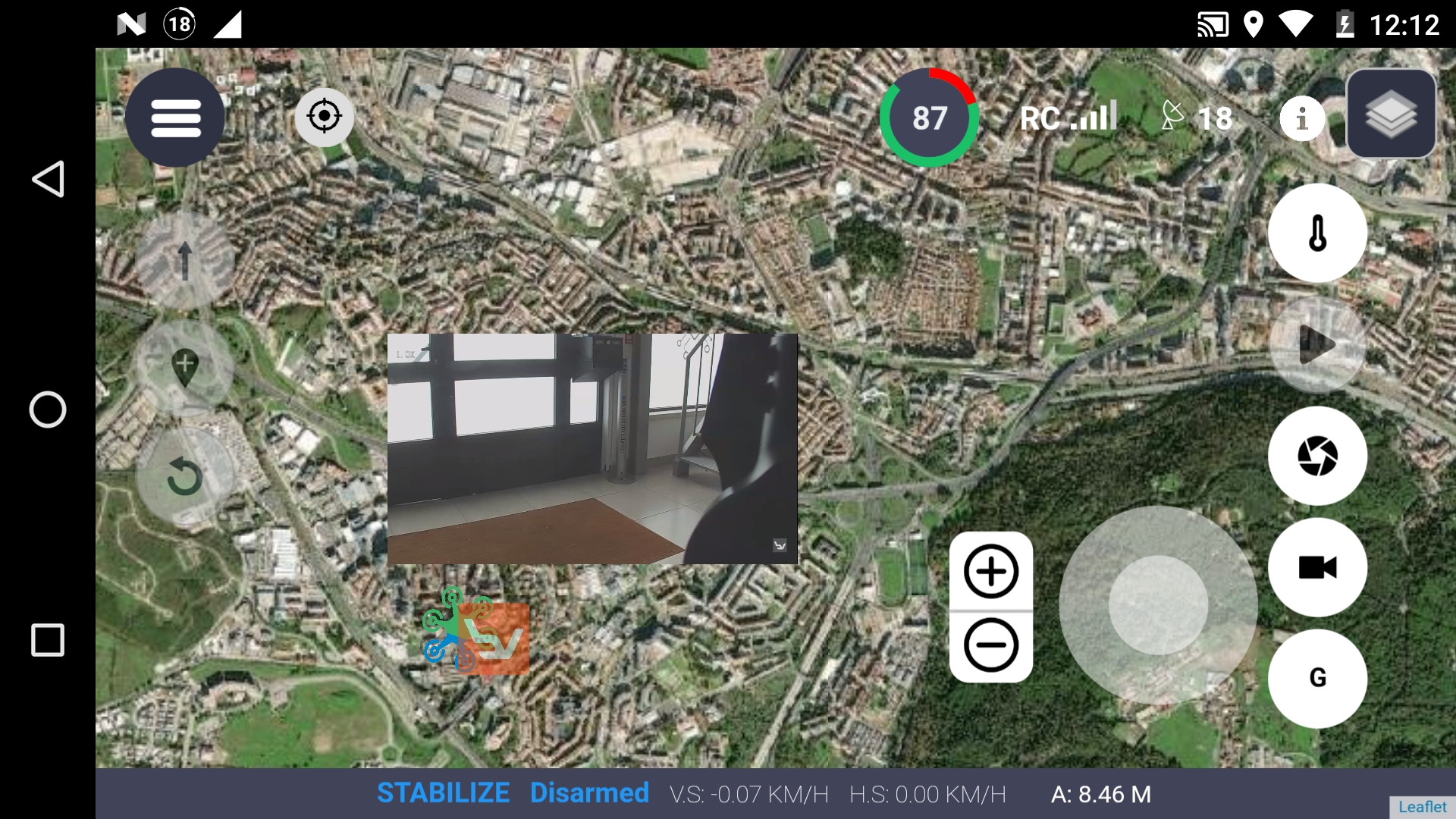 This is the screen intended to help you while the drone is flying. In the background of the screen you should observe a map of the area surrounding the drone and/or the herelink controller. When the drone is outside of the current observed area, you can use the target button on the top left on the screen to center it on the drone location. The map is downloaded as you try to view it, and therefore requires a connection to the internet. In case you do not expect to have internet access at the flight location, you can download them beforehand and it will be stored in the controller for future use. To use this feature, use the information button on the top right of the screen as described in the following sections.

In the top right corner you can observe system status information: 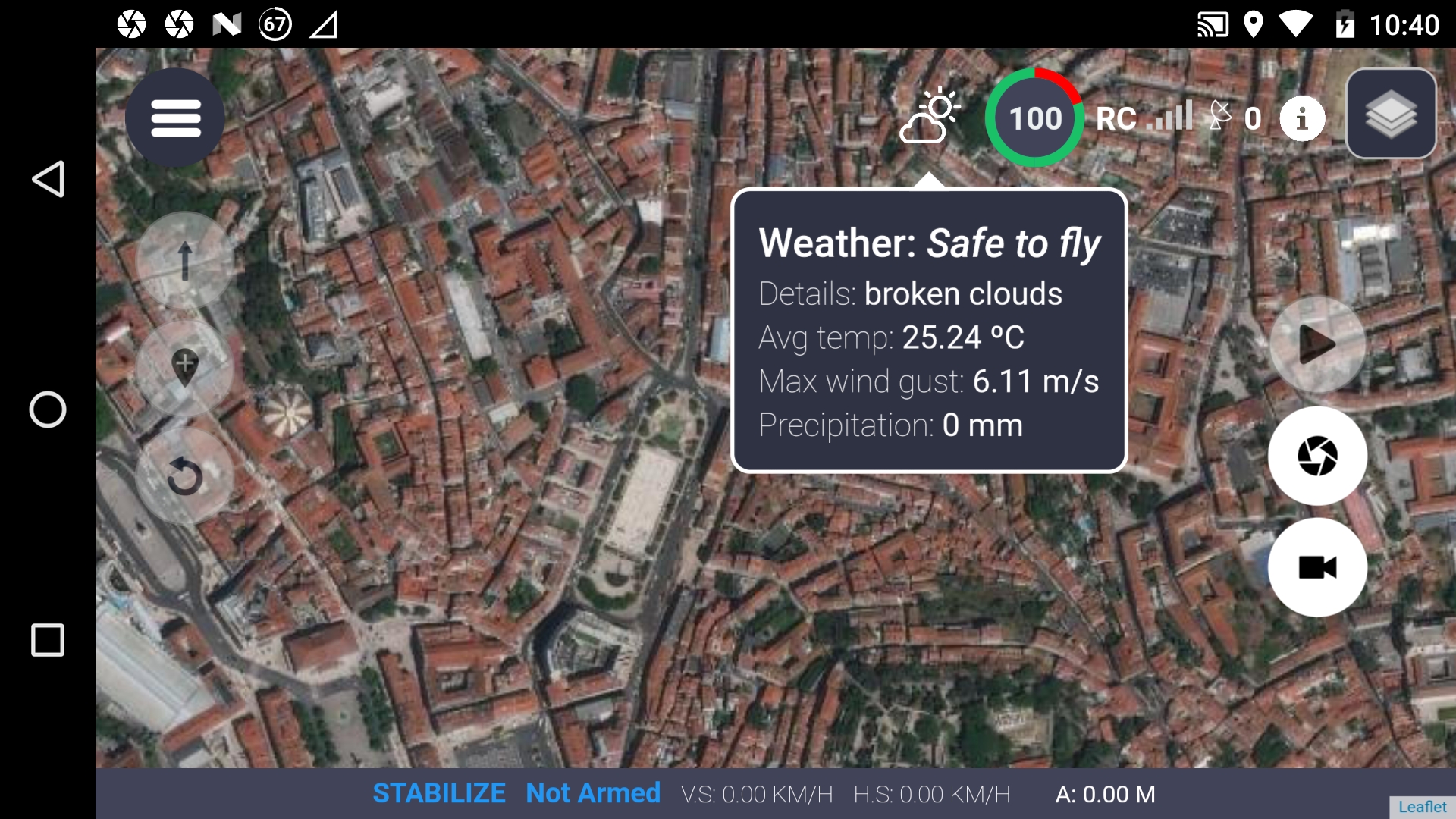 When you select the option to download map sections, the following screen should appear: 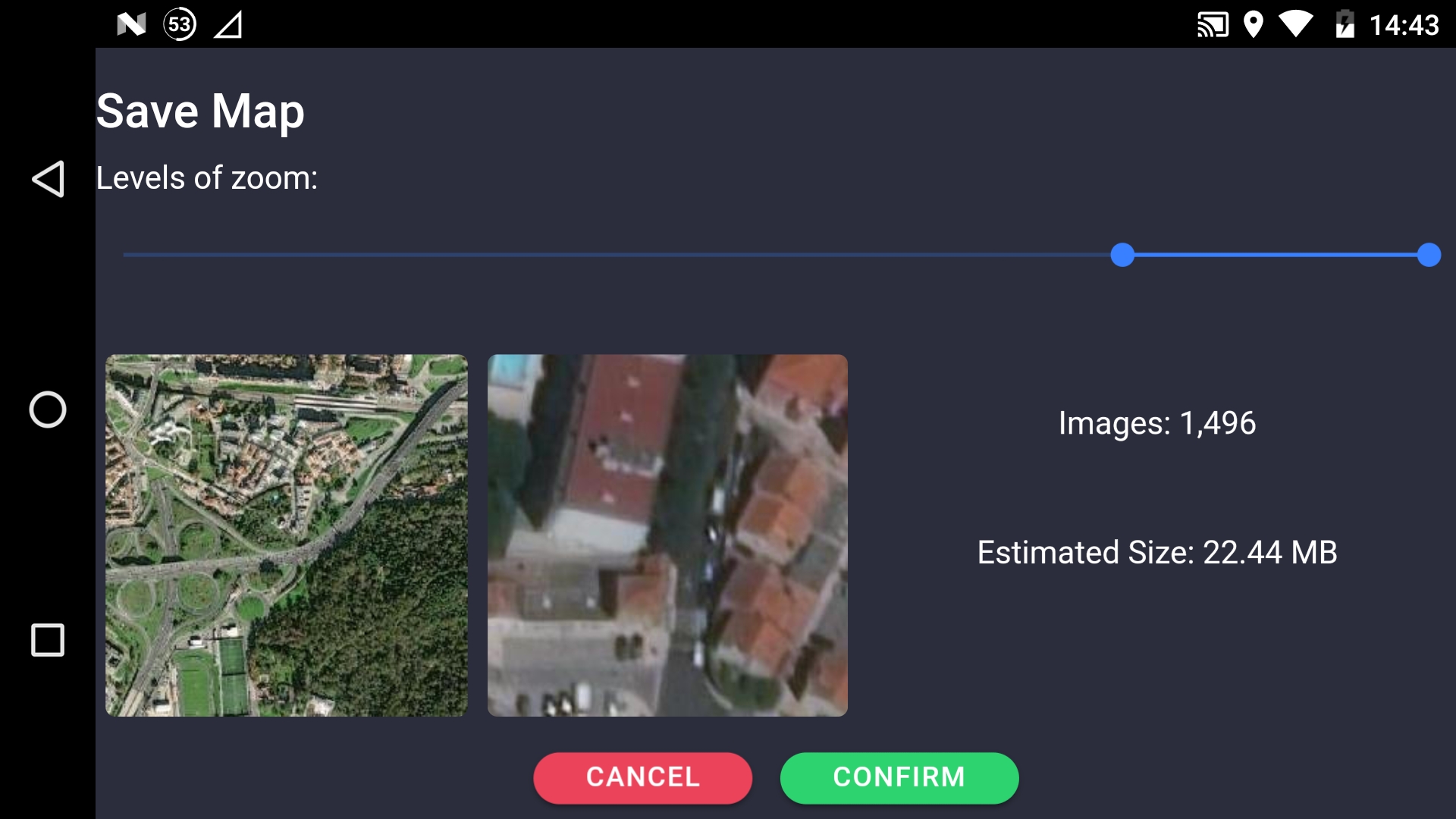 You can download multiple sections, even if not contiguous, to be used whenever the monitor screen is covering that area.

In the bottom bar you can observe:

The buttons on the left side of the screen are related to the drone, and allow you to:

The buttons on the right side of the screen allow you to interact with the currently attached camera, such as:

To the left of these buttons you have these additional buttons to interact with the gimbal:

On top left icon allows you to change between the different views, where you can, respectively, monitor the drone (the page where you first start), build a misson, or calibrate it. We will now see what you can do in those pages.

When you select the mission builder, the following screen should appear:

Here you can create, edit, export and import missions.

On the left, you have 3 buttons.

The first button allows you to create missions, import/export files containing missions from a file, or import a mission from the drone.

The second button allows you to send missions to the drone, as well as send a mission and automatically start it.

The third button clears the present view of any missions.

On the right, you have a sliding window to open the edit mission menu.

Here you can change settings for the execution of the whole flight regarding altitude and flight speed, as well as edit the behaviour on each waypoint. 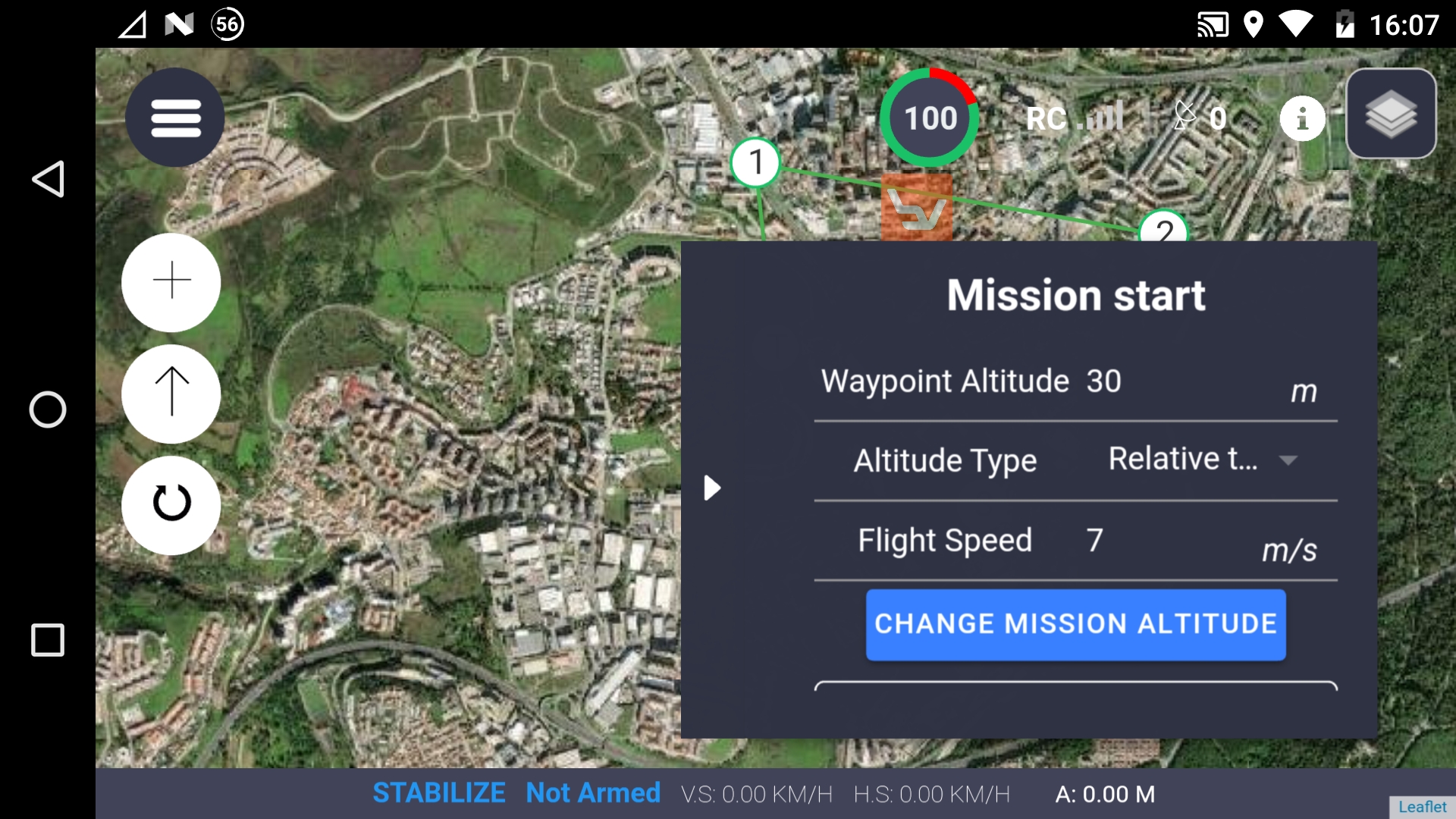 The calibration menu will guide you through a series of steps to ensure proper performance by the drone. 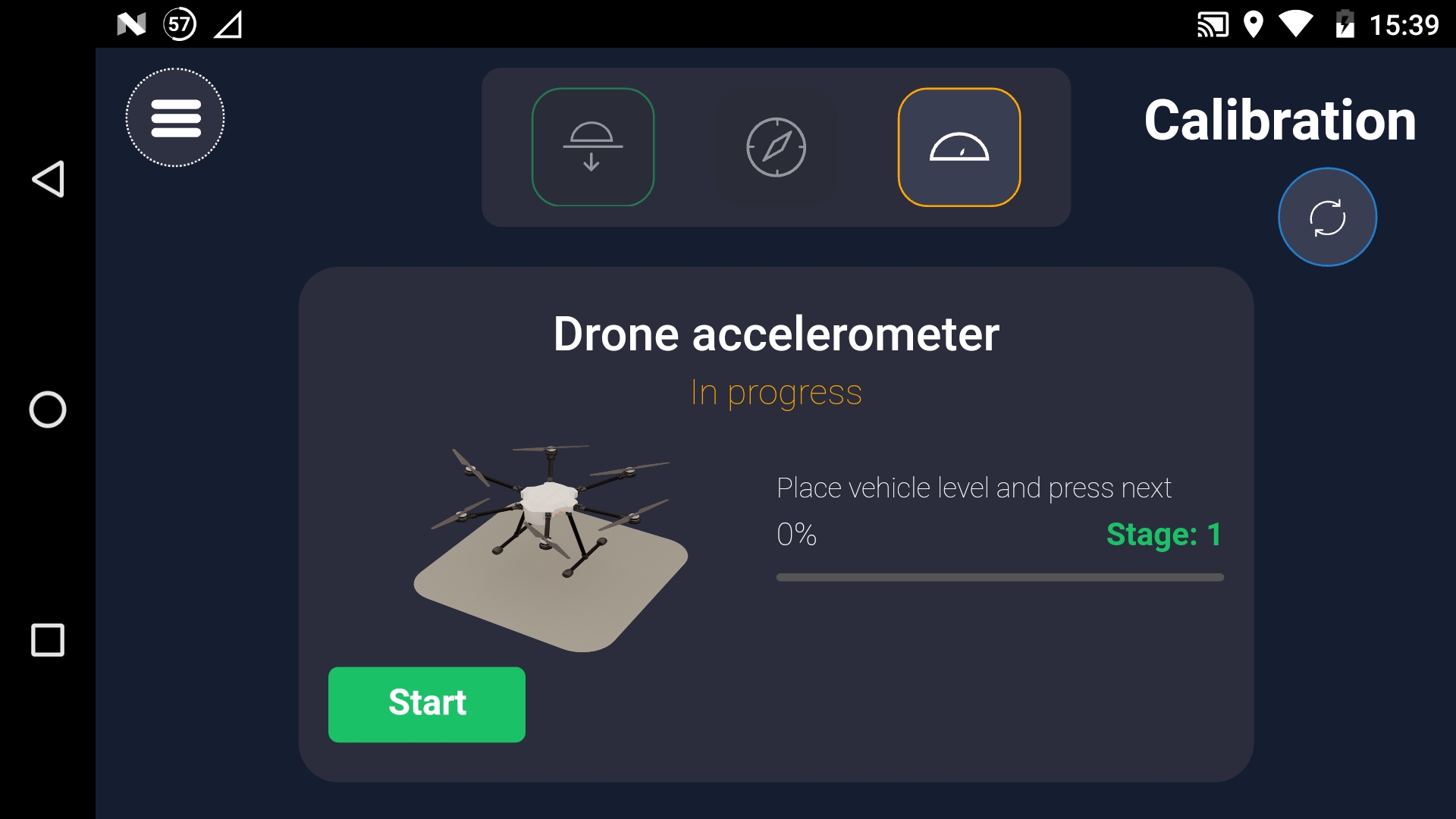 Unless in emergency, do not try to arm or disarm the rotors when in flight, as this will likely result in critical failure and drone crash!

This control enables a tight operator control of the drone’s movements, providing that the drone is within the control’s radio link range (approx. 1km in open-field line-of-sight) and manual mode has been selected on the drone.

The pictures below show the front and back view of the Control, together with a description of the commands that can be used to control the flight.

The following are the commands to the drone:

The other buttons and sliders are reserved for future use (professional users own setup).

The following functions can be obtained from the back of the Control:

Unless in emergency, do not try to arm or disarm the rotors when in flight, as this will likely result in critical failure and drone crash!

The HEIFU® Kit comes equipped with up to 4 payloads, but it is also prepared to use other cameras, depending on the purchased package. The following sub-sections describe some of the payloads that are integrated and can be used with HEIFU.

The camera is assembled on the front of the drone, on the primary gimbal, at the battery compartment level.

The depth camera that makes part of the HEIFU® kit is an Intel® RealSense™ stereo camera that comprises two cameras to calculate depth and enable devices to see, interact with and learn from their environment. Stereo depth works in indoor and outdoor and in a wide variety of lighting conditions without the need for custom calibration.

This camera is assembled on the front of the drone, at the battery compartment level.

Bellow you can find the FLIR Vue Pro™ Specifications:

Available via the Pack 5 - Thermal

The insta360 Pro is a 360º VR camera equipped with six 200° lenses that record in 8K, allowing a full user’s experience. The visualization of this stream is already available at Beyond Skyline and is compatible with VR equipment (you can contact Beyond Vision for more information regarding this equipment). Furthermore, the camera has multiple functionalities and ports, and we advise you do carefully read the specific user manual of the camera. A support adapter is provided with the purchase of this equipment to mount it in HEIFU®. Due to the weight of the camera, we recommend that when using it, don’t use any more equipment to maintain the drone as light as possible for better stability.

Please see Insta360 setup for instructions on how to setup the camera’s configurations and start live streaming.

Available with Pack 6 – all around

The multispectral camera is assembled to the secondary gimbal on the lower part of the drone, below the battery compartment.

If you need cameras other than the ones described above, please contact Beyond Vision in order to confirm if it is possible to integrate them in the drone.

The HEIFU® drone comes equipped with one gimbal for stable operation of the high definition camera. This gimbal is assembled on the front of the drone, near the battery compartment. A second gimbal can be assembled below the battery compartment by using one of the mounting adapters supplied with the HEIFU® drone kit. A suitable gimbal can be purchased from Beyond Vision as an add-on to the kit or can be purchased from a third-party providing it complies with the specifications. Gimbal control: Servo.